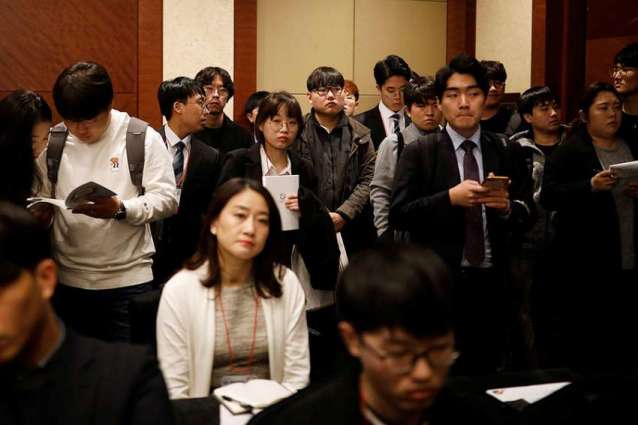 (Xinhua) — South Korea’s job growth topped 300,000 in 2019, more than tripling compared with the previous year, while jobless rate was steady at 3.8 percent, statistical office data showed Wednesday. The number of those employed was 27,123,000 in 2019, up 301,000 from a year earlier, according to Statistics Korea. It was over triple an increase of 97,000 tallied in 2018. The year-over-year employment growth continued to recover last year by expanding from a mere 19,000 in January to more than 200,000 between May and July, and more than 300,000 between August and November. The on-year job additions in December reached a whopping 516,000, marking the fastest increase in 64 months. The number of those unemployed was 1,063,000 in 2019, surpassing the one-million mark for the fourth consecutive year. Jobless rate was 3.8 percent last year, unchanged compared with the previous year.

Minister of Economy and Finance Hong Nam-ki, who doubles as a deputy prime minister for economic affairs, told a press briefing that the labor market conditions achieved a V-shaped recovery last year, vowing to make all efforts for sustaining the recovery trend this year. Unemployment rate for the younger generation aged 15-29 fell 0.6 percentage points over the year to 8.9 percent in 2019, recording the lowest in six years. The so-called expanded jobless rate for youths, which reflects labor market conditions more accurately, came in at 22.9 percent last year, the highest since relevant data began to be compiled in 2015. The official unemployment rate refers to those who are immediately available for work but fail to get a job for the past four weeks despite efforts to actively seek a job. The expanded jobless rate adds those who are discouraged from searching a job, those who work part-time against their will to work full-time and those who prepare to get a job after college graduation, to the official jobless rate.

Jobs in the health and social welfare service industry increased 160,000 last year, and the figures for the eatery and lodging, and the science and technology services sectors grew 61,000 and 60,000 each. Employment in the manufacturing, the wholesale and retail, and the finance and insurance sectors declined 81,000, 60,000 and 40,000 respectively. The number of regular workers advanced 444,000 in the year, but those for irregular and daily employees retreated 56,000 and 31,000 each. The hiring rate for those aged 15 or higher gained 0.2 percentage points over the year to 60.9 percent in 2019, the highest in 22 years. The OECD-method employment rate among those aged 15-64 rose 0.2 percentage points to 66.8 percent last year, the highest since relevant data began to be compiled in 1989. The employment rate gauges the percentage of working people to the working-age population, or those aged 15 or above. Amid the aging population, it is used as an alternative to show the labor market conditions more precisely. The number of economically inactive population grew 31,000 over the year to 16,318,000 in 2019.

The so-called “take-a-rest” group, which replied that they took a rest during a job survey period, advanced 238,000 in the year. It is seen as important as the group can include those who are unemployed and too discouraged to search for work for an extended period of time. Discouraged workers, who gave up efforts to seek a job because of the worsened labor market conditions, increased 9,000 in 2019 from the previous year. Enditem